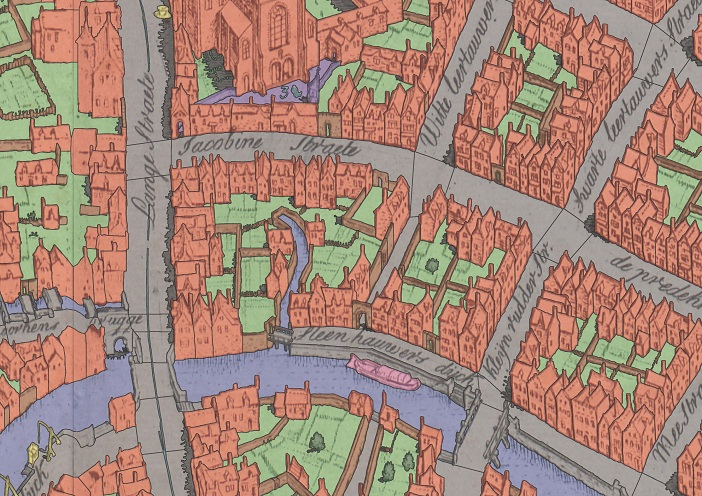 Elien Vernackt graduated in 2011 as Master of Arts in History at Ghent University. Her master thesis was about Bruges on the map of Marcus Gerards, under the guidance of promoter Prof. Dr. Jan Dumolyn. Since then she has been working on the MAGIS Bruges-project for almost five years. The first year she worked for KU Leuven, after that for Musea Bruges (more specifically Bruges museum and vzw Kenniscentrum). Elien is responsible for the further technical and content- wise development of MAGIS Bruges, the volunteers that help with database entry and she also contributes to the redesigning of the Gruuthusemuseum.

The sixteenth-century map of Bruges by Marcus Gerards has appealed to our imagination for centuries, and researchers use it regularly to illustrate their publications on a variety of subjects. The MAGIS Bruges-project has made the map fully accessible in a digital environment. What is more, the map is embedded in an extensive database that offers a significant amount of information on (late-)medieval Bruges. The MAGIS Bruges project fits perfectly within the idea of Digital Humanities for a number of reasons. First, setting up such a project requires a number of collaborations and a healthy dose of patience. The conversion of this scientific database to an instrument for a larger public requires quite a different approach. On the one hand, academics are increasingly searching for new digital ways to publish their research results to a broad audience. On the other hand, public-oriented institutions such as museums feel the need to profile themselves on an academic level. MAGIS Bruges aims to respond to this double trend by reconciling the requirements of both the academic and the public-oriented institutions. In this lecture, Elien Vernackt discusses the entire MAGIS Bruges project prior to the development of the database and the map application. She talks about the different ways in which this project is accomplished technically as well as content-wise, and which collaborations were established in the process.